A quick peek at the new Ligurian infantry sculpted by M. Campagna which will soon be added to the catalog... The Ligures (often Ligurians in English) were an ancient people who lived in a vast region comprising not only the area that is still called Liguria today, much of Piedmont and part of other nearby regions of north-western Italy, including Corsica and Sardinia, but also a large part of what today is southern France as far as  Massilia (modern Marseilles). According to Plutarch they called themselves Ambrones, but this does not necessarily indicate a relationship with the Ambrones of northern Europe.
Nobody knows for sure what are the origins of these people, there were probably a Celtic population but there is also a Pre-Indo-European origin thesis according which the Ligurians, together with the Iberians, constituted the remains of the native populations that lived in Western Europe and therefore would be direct descendants of the Cro-Magnon men that lived throughout Gaul from the Mesolithic.
The Ligures seem to have been ready to engage as mercenary troops in the service of others. Ligurian auxiliaries are mentioned in the army of the Carthaginian general Hamilcar in 480 BC. Greek leaders in Sicily continued to recruit their mercenary forces from them as late as the time of Agathocles.
They fought long and hard against the Romans, but were assimilated by them during the 2nd century BC.
According to Livy the Roman forces raised for the Third Macedonian war included 2000 Ligures.
Ancient sources mention Ligurian hexagonal shields. 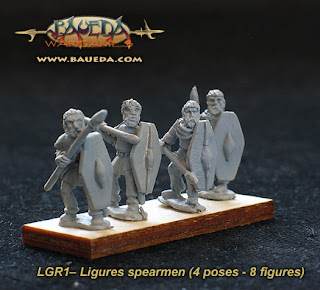 Production molds for these figures are now ready, so these will soon be in catalog!
Posted by Baueda at 00:13