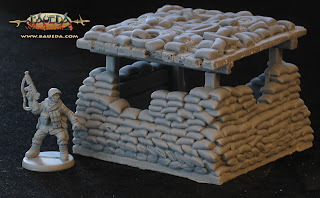 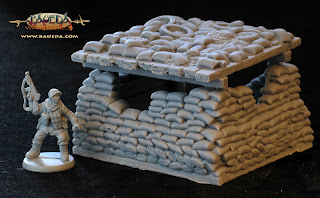 This sandbag bunker is part of the new command post pack, the roof is a separate piece and can be positioned at different heights depending where you set the beams in relation to the posts.
The images are of the first test cast, production should start shortly... the figure is there for size reference only, it's a 36mm figure from the new coming 1-48COMBAT faction for the game, that is a bit further down the line though... :) as you can see is perfectly usable with 28mm figures (which are 30-32mm high) as well. 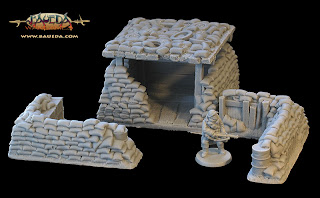 Seen from the back with the two corner sections of entrenchment included in the command pack. 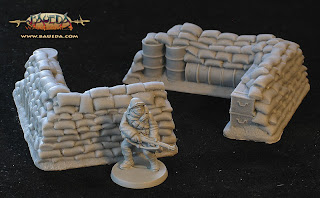 The corner sections will also be available separately, as well as another couple of packs which are still in development (straight sections and inner corners) and are obviously designed to match those included with 48012CS Mark Shuster and 48011 Igor Povlyak, the German and Russian grenadiers.
Together all these components form a complete modular system that will let you create a great looking fortified emplacement in a few minutes, and you can change it every time you play, plus it can be used on every front of WWII, from North Africa to the Pacific, but is also perfect for Vietnam, Korea, and even dark future settings...
Posted by Baueda at 00:23